The number of people whose time, talent and treasure had a remarkable impact on TUMC and inspired so many others to serve selflessly is beyond measure.  We are still benefiting for their devotion.  May they continue to live in our memories.

In the book titled The Garden of Methodism (1948) by Reverend Ernest C. Hallman, there is reference to the journal of Jesse Lee, a circuit-riding Methodist preacher, wherein Jesse Lee writes: “1784 I preached at Tilghman’s. There was a gracious move among the people. I preached in a new meeting house to a large company.” In 1784, Reverend Lee was only 26 years old when he came to Tilghman’s Island on horseback and preached a sermon which began our church. Jesse Lee preached all over the Delmarva Peninsula, as far south as North Carolina, and up into New England as far north as Maine; and he went on to become one of the leading pioneers of the Methodist Church during the first 40 years of our nation’s history. He was also our first Methodist historian and wrote many books about the Methodist Church. Reverend Lee also served as Chaplain of both the U.S. House of Representatives (1809-1814) and the U.S. Senate (1814-1815). Jesse Lee died in 1816 at the age of 58, and is buried in the “Garden of Bishops” at Mt. Olivet Cemetery in Baltimore. Several Methodist churches were name after Jesse Lee to honor his good work. In 1909, William H. Meredith wrote a book titled Jesse Lee, A Methodist Apostle. The congregation at Tilghman United Methodist Church would agree that the title “Apostle” is well-deserved for Jesse Lee, a servant of God who preached the first sermon, at the first Methodist church, on Tilghman’s Island.

Harold Fordham (1892-1969) served as pastor of Tilghman United Methodist Church (and Tilghman Methodist Episcopal Church – previous calling) from 1938 to 1946 and from 1963 to 1965. His combined tenure made him one of our longest-serving pastors. Pastor Fordham began his ministry as a “home missionary” in West Virginia bringing the word of God through Jesus Christ to the unchurched. He then served churches in the Peninsula United Methodist Conference for 44 years. David “Bunky” Miller, president of the United Methodist Men at TUMC, recalled that Pastor Fordham was a great preacher, Sunday School teacher; and active in Tilghman’s Island community organizations. In that connection, Reverend Fordham was one of the first officers of the Tilghman Volunteer Fire Company. Phyllis Sadler (nee Harrison) sang in the choir during Harold Fordham’s first stint as pastor. Phyllis recalls that after he departed in early 1946 for a call to serve at another church, he returned to TUMC later that year, at Phyllis’ request, to gratuitously perform the marriage ceremony when she wed Leroy Sadler. Pastor Fordham was married to Mabel Irene Fordham (nee Goodman). Both Bunky Miller and Phyllis Sadler remembered Mrs. Fordham’s dedicated service as organist, Sunday School teacher, and Men’s Bible Study teacher. Reverend Fordham’s obituary, published in the Salisbury Daily Times newspaper, also revealed that he was Chaplain of Doric Lodge No. 30, of the Ancient Free and Accepted Masons. (Rev. Fordham is shown in the photo, top row, third from the right.) Ron Frampton 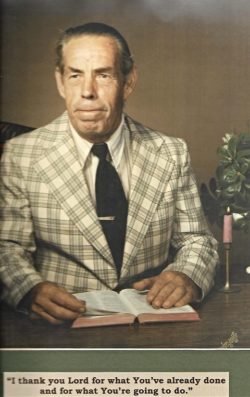 Robert James Harrison (1931-2003), affectionately known as “Bob”, was a stalwart of Tilghman United Methodist Church having ably served in church administration; and was a notable voice to be heard when hymns were sung. As Sexton, he was the one who called us to worship by faithfully ringing the church bell on Sunday morning. His photo is posted next to the church bell rope in the narthex.
Ron Frampton 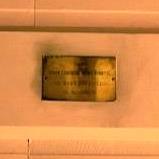 Samuel Otto Fairbank (1900-1987), known as “Otto”, constructed the narthex entrance doors to the church. In appreciation, a bronze plaque was attached to the inside left door and inscribed as follows: 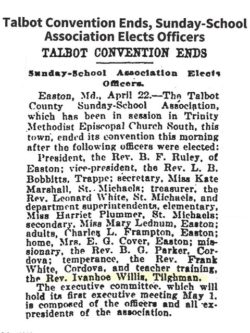 Rev. Ivanhoe Willis of TUMC, was mentioned in this article in the Baltimore Sun, April 23, 1916. 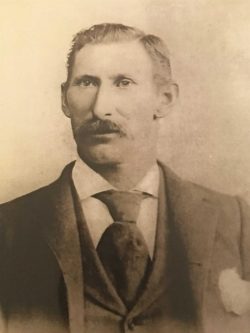 William Sydney Covington (member of Tilghman’s Island Methodist Episcopal Church – predecessor to TUMC) was the first U.S. Postmaster at Avalon, Maryland from 21 August 1900 until 13 January 1913. He was succeeded as Postmaster by his brother James F. Covington. Avalon is one of the four villages on Tilghman’s Island. Avalon Post Office remained in operation until February 12, 1965.